In the last few years, due to the international streaming, the popularity of Turkish TV series has increased with rapid pace. Though Turkish dramas are being dubbed to on-air at local television of UAE, India, Saudi Arabi and Pakistan but hardcore fans love to watch them with English subtitle as well. In this article, DigitalCruch is going to share recent and high rated Turkish drama series with you.

Sefirini Kizi is a brand-new Turkish series with getting much appreciation from international and local fans of Turkish drama. Yes, Engin Akyürek is playing the lead role in this series with the name of ‘Sanjar’ or probably, in Turkish, it will be written as ‘Sancar’. The story revolves around a girl ‘Nare’ which is the daughter of an Ambassador. She leaves his lover on the wedding night and tries to commit suicide, and after 8 years, she comes with her 8 years old girl ‘Melek’ in the life of ex-husband. You can read everything about Sefirin Kizi here.

Yes, for the ease of our readers, we have already published all details of Sefirin Kizi plot, timings, cast and other information in a comprehensive review. Hopefully, upcoming episodes of Sefirin Kizi will increase your interest in this Turkish series.

Dirilis: Ertugrul or Resurrection: Ertugrul is considered one of the high grossing historical fiction of Turkish drama industry. This TV series didn’t only get massive viewership in Turkey but from other middle east, European and Asian countries as well. The story of Dirilis: Ertugrul revolves around a brave Turkish warrior of the 13th century named ‘Ertugrul’ who is also known as the father of the Ottoman Empire.

Although the lead actor Engin Altan Duzyatan wasn’t ready to play his role in this historical series in the beginning but time proved that he made the right decision. Therefore, if you are looking to watch a Turkish TV series with English subtitles to know historical aspects of Turkish people and culture, then it could be the best choice for you. The 6th season of Dirilis: Ertugrul is being released soon.

In brief, if you want to get rid of all daily worries and willing to watch a light pitched romantic Turkish drama then Afili Aşk should be your first choice. Hopefully, you would love to watch this Turkish series in 2020.

Finally, Netflix fulfils the demands of its Turkish series fans and comes with an epic piece of series. Yes, with excellent cinematography Rise of Empires: Ottoman is worth watching Turkish series if you want to know about the history of Ottomans. The story revolves around the Ottoman Sultan Mehmed II and his bravery.

If we talk about the main cast, then you would see your favourite Turkish celebrities, including Cem Yigit Uzümoglu, Selim Bayraktar and Tuba Büyüküstün. Luckily, you don’t need to watch this Ottoman series with English subtitles because Netflix aired it in both English and Turkish. Hopefully, you would love to watch this Turkish series.

Sampiyon is another Turkish action series with a sports theme. Even its trailer got much fame among the Turkish and non-Turkish audience. The story of this Turkish series revolves around a dedicated box ‘Kafkas’ who would have to leave the boxing due to injury. But, don’t stop loving boxing. He dreams of conquering the boxing ring again with his son.

It’s a worth watching TV series, and according to Drama gurus, it could be famous like Ertugrul due to its strong story and theme.

Another new classic TV series of Star TV Turkey. Yes, it is a new drama by Halit Ergenç in which he is playing the role of an economics professor. Likewise, the other Turkish series of Halit, Babil is also very chic. However, if we talk about the reaction of viewers, then it is mixed because the storyline of Babil is mysterious.

All in all, we would suggest you watch Babil first and then you have the choice to go with controversies. In the same token, there is also good news of Nur Fettahoglu fans because he is also starring in this new Turkish series of Star TV.

This is considered one of the best Turkish series in terms of motivation for people living with any disability. Yes, the story of Mucize Doktor revolves around a boy “Ali” who was born with savant syndrome. Due to this disability, his father doesn’t accept him as a family member, and he lives in several orphanages. But, finally, he completes his graduation in medicine and starts his job as assistant surgeon.

There is also good news for the fans of Taner Olmez because Taner Olmez is playing the role of Autistic doctor in this Turkish series. Though it is a new Turkish series but almost every episode of this one of the best inspirational Turkish series will give an unforgettable lesson of life.

The Protector that is also known as Hakan: Muhafiz in various parts of the world including Turkey. Surprisingly, this mystery fantasy series got too much appreciation from the viewers of Turkish TV series around the globe, and that’s why Netflix has also premiered 1st season The Protector in 2018.

If we talk about the cast, then the fans of Cagatay Ulusoy should be happy that he is playing the role of Hakan Demir who has the special powers to fight against dark forces. His friends also help him in further fights. As the first season was a big hit in 2018, that’s why it is being expected that Turkish drama fans would love to watch the second season in 2019.

If you are a die-hard fan of exciting love stories, then Elimi Birakma is the best Turkish drama series that you must watch with English subtitle. The story revolves around a girl ‘Azra’ who is willing to become a good chef like her father but after the accidental death of her father she troubles. As I have said, this is a fascination drama then you must watch Don’t Let Go of My Hand or Elimi Birakma in this summer.

Kuzgun is one of the most recent Turkish TV series on our list. Radically, the story of this TV series is about the two policemen and their families. One of them cheated with the other friend and took bribe and misled the department against an honest friend. Later, the boy of Yusuf came to take revenge, and his name was Kuzgun. Moreover, if you want to explore more about this romantic Turkish drama series further then, we would recommend you to watch it with English subtitle. You can also go with the original version if you can understand Turkish.

Hercai is a brand-new Turkish TV series that is starring Akin Akinozu in the role of Miran who initiates to marry the daughter of Reyyan to take revenge of his parents. It is hard to predict what is going next in this thrilling TV series, but it is the right choice in terms to spend quality time in front of TV screens.

Cocuk is a family-oriented Turkish series where a daughter of a prostitute mother named ‘Akca’ wants to raise her son in the right manner. In this regard, she gave her son for adoption to a well-known and wealthy family. However, the twist comes into the story when the foster mother of Akca’s son expects her son child.

In short, it is a family-centric but a mysterious story where you will see how things transform after the revelation of truths of different mothers. In addition, the cast is also fantastic and Turkish drama fans would able to see Ismail Hacioglu, Nazan Kesal and Serhat Teoman in this Turkish TV series.

Either you understand the Turkish language or not, you would love to watch this comic Turkish TV series. However, it is a better idea to watch this show with English dubbing or subtitle. The story of Erkenci Kus revolves around a girl Sanem who has two choices to marry or have a proper job. Though her dream is to become a writer but her parents, don’t trust her skills. All in all, it is a lovely romantic TV series with the spicing of comedy.

Finally, Kanal D came with a classic Turkish series for its viewers with an epic storyline. The story of “Zalim Istanbul” is about a women Seher and her three children who live in Istanbul. Withal, the story totally changes after the encounter Seher. To explore more about this Turkish series, you would have to watch all of its episodes.

On the other hand, there is also good news for the fans of Mehmet Ozan Dolunay, who is also known as Ozan Dolunay. Yes, he is also in action in this classic Turkish series in a different character. The female lead will also impress you with their bold acting skills.

With outclassed performances from the cast, best direction and exciting story, Ask Aglatir is getting popular among the Turkish drama viewers. The story revolves around the girl Ada who migrates to Istanbul due to some conflicts regarding marriage. Beautiful actress Hafsanur Sancaktutan is playing the role of Ada.

On the other hand, you would be also able to see Yagiz Can Konyali in the role of a cool-minded boy who tries to help the Ada. However, Deniz Can Aktas is playing the role of the lead actor in this Turkish series.

Hopefully, none of our readers will mix it with old Turkish series Yemin. Yes, it is the latest Turkish drama starring Gokberk Demirci and Ozge Yagiz. Indeed, it is a great show to watch for household wives, but we will leave further reviews on this drama on our readers.

Halka is another good action-based Turkish series that got a response from the viewers. This drama series could be the right choice for viewers who love to watch dramas cover the topics of mafia, money and crime. On the contrary, there is also good news for the fans of Hande Ercel who is playing the role of Mujde Akay in this series.

Do you believe in fate? If yes then you must watch Carpisma or Collision. The story will make you believe that destiny exists. In this TV series, you can see the Kivanc Tatlitug in the main lead where four characters meet with each other accidentally, and a new chapter of their lives starts. In the same token, if you are unable to stream matches of former basketball play Kivanc Tatlitug then we would love to watch him in Turkish series.

This is a brand new Turkish TV series. The story of this Turkish series revolves around a trio of Ferhat, Shirin and Banu. Tolga Saritaş is being starred as Ferhat, Leyla Tanlar as Shirin and Cansu Dere as Banu. Basically, it’s a story of magical love where miracles happen to keep the hero and heroine close.

According to the viewers of this drama, it successfully got the attention of fans with its strong storyline, attractive cast and outstanding performance. Hopefully, you would also love to watch this Turkish series with English subtitles.

Siyah Beyaz Ask is the best recommendation for the viewers who want to watch Turkish dramas with some common topics. The story revolves around a female doctor and a brutal killer. Hopefully, you will like to view this romantic drama series.

In brief, the primary purpose of sharing this article with our readers is to give them a little overview of the most recent Turkish TV series. You can share your views with us by commenting below and can also suggest more latest dramas. 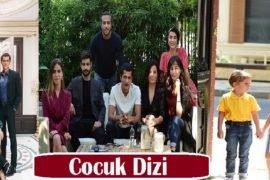 Cocuk (The Boy) Turkish Series: Story, Cast & Everything You Need to Know