It is beyond the bounds of possibility if someone says he doesn’t like to watch impressive storylines, heart-gripping acting and dramatic plots. With all of these fascinating characteristics, Turkey has become the second biggest exporter of TV series after the United States. Yes, according to sources, the revenues of Turkish series export hit $350 million per year in 2017. All genres, including historical Turkish series, have huge viewership in Europe, the Middle East, Asia, Latin America and North Africa.

Indeed, Turkish historical series are not only admired among Turkish people who want to explore their days of yore, but international audiences also watch them due to their outstanding plots, full of action episodes, stunning acting and costumes.

Probably, many of you have already watched the Turkish historical series on Netflix, but there are still too many historical Turkish dizis that you must watch once in life. In this article, DigitalCruch is going to share one of the best historical Turkish series with its readers.

Kuruluş: Osman is a new historical fiction that revolves around the life of Osman-I who was the founder of the Ottoman Empire. The producers of this Turkish historical drama are the same ones who produced Diriliş: Ertuğrul. Yes, it is Diriliş: Ertuğrul’s sequel and many characters of Ertugrul are continuing their performance in The Founder: Ottoman.

There is also good news for fans of Burak Özçivit because he is starring as Osman Bey, the son of Ertugrul Ghazi. Hopefully, this historical fiction will break all records of popularity like Resurrection: Ertugrul.

Do you want to watch your favourite Çagatay Ulusoy in a historical Turkish series in a different role? If yes, then Yesilcam is another historical Turkish that captivates your interest from the very first episode. This series has two seasons out and got a respectable amount of audience. The plot setting is fascinated by the golden era of Turkish cinema back in the 1960s.

Çagatay Ulusoy, aka Semih Ates (protagonist), plays a passionate producer’s role. The storyline shows the struggle of this producer in an effort to create a blockbuster film. Therefore, you find a lot of inspiring details from the cinema industry. Besides, you will also find a touch of romance embedded right into the story. So it is yet another show you can binge-watch and still won’t regret.

Destan is a wonderful historical Turkish series, that takes up a worthy and valiant story of a girl from 750 AD. Destan was recently aired, but it did manage to attract a substantial audience. You will be experiencing the thrill, action, and suspense all trapped inside this heroic storyline.

The story mainly revolves around a mountaineer female fighter Akkiz. She struggles hard and goes through troublesome trials to mark her way towards real destiny. Ebru Sahin is playing the role of Akkiz in this historical drama series after the massive success of Hercai.

Similarly, you are likely to witness valuable, ancient and cultural Turkish aspects with action that carries throughout.

This is one of the famous Turkish drama series with four seasons out. And people seem to love the strong storyline and all the characters. The genre of Bir Zamanlar Çukurova is based on drama, and it sticks closely to everyday life’s troubles. The story dates back to the 1970s in Istanbul.

You are likely to witness the troublesome love story of Zuleyha and Yilmaz. Additionally, the story dominates the audience by ingraining thrill and mystery in each episode. The drama itself has a loyal fan base, making it one of the well-known Turkish dramas.

Uyanis Buyuk Selcuklu is another new Turkish historical drama that has aired on the platform TRT1. This Turkish Islamic drama presents the courage, war skills and bravery of the Seljuk Empire. With 8.3 IMDb ratings, it has been trending among the best Turkish action series from the beginning.

Though its first season has been aired but the news about the making of Uyanis Buyuk Selcuklu season 2 is also circulating among the fans. In addition, if we talk about the cast, then the performances of Ekin Koç and Bugra Gülsoy are going to enhance your interest in this TRT1 historical drama.

Vatanim Sensin is a lovely and heart-touching historical Turkish series that is full of emotions and memories of sacrifice. It is a story of a brave Ottoman commander Cevdet and his wife, Azize. Both of them tried hard to survive for their country and family in the difficult times of the Balkan Wars.

Versatile Turkish actress Bergüzar Korel is playing the role of Azize who is a mother of three kids and wife of frontline commando Cevdet. In this series, you will see how a real soldier fights for his country to the last drop of blood and how a wife becomes faithful to her husband until the last breath.

The story of this historical Turkish series revolves around a warrior of the 13th century ‘Ertuğrul Ghazi’. Yes, this series captures the heroic journey of the father of the Ottoman Empire. Yes, Ertuğrul was the father of Osman I. Resurrection: Ertugrul shows how a poor Turkish tribe ‘Kayi’ changed the lives of their people under the leadership of Ertugrul.

Engin Altan Duzyatan touched new heights of popularity after playing the role of Ertuğrul in this series. Other characters including Cengiz Coskun, Nurettin Sonmez and Esra Bilgic also became the centre of attraction due to their classic performances.

This series is not only available on Netflix, but different European, Middle East and Asian countries also aired it on their TV screens. Due to the terrific display of scenes, impressive acting and direction, this series is also known as the Turkish Game of Thrones.

Barbaros is one of the most anticipated and new historical Turkish series that is starring the famous actor Engin Altan in the lead role. This latest Turkish historical drama series films the story of Mediterranean sailor Barbaroslar and his brothers. The real name of Barbaroslar was Khiḍr Hayreddin Pasha who was also famous for the title of ‘King of the Sea’.

Indeed, your favourite Ertugrul hero Engin Altan is playing the main role of Barbaros. TRT1 has already released the trailers of this new Turkish dizi, and fans can probably watch initial episodes of Barbaros in the mid of September 2021.

If you don’t want to watch Turkish historical dramas about Ottomans, then Kurt Seyit ve Şura should be your first choice. It is a true love story of a beautiful Russian woman and Turkish army officer who fell into love. Handsome Kivanç Tatlituğ is playing the lead role in this mini-historical series. Fans of Farah Zeynep should also be happy because she is starring Sura.

Muhteşem Yüzyil is one of the first Turkish historical dramas which got much appreciation at the international level due to its use of classic costumes, acting, direction and dramatization of the Ottoman empire. This historical fiction is basically the biography of Sultan Süleyman, who became the ruler of Turkey at the age of 26. During 46 years of reign, Süleyman achieved too many victories and was famous as a great warrior in East and West. Moreover, Muhteşem Yüzyil or Magnificent Century doesn’t only cover his life as a ruler but also displays his personal activities.

On the other hand, if we talk about the cast of Muhteşem Yüzyil then their performances will astound us. Indeed, Halit Ergenç proved his outstanding acting skills after playing the role of Sultan Süleyman. Co-actors including Nur Fettahoglu, Okan Yalabık and Meryem Uzerli also did their jobs correctly.

Filinta is another one of the best historical Turkish series, which is also available on Netflix. As compared to other historical fiction of Turks that isn’t about Ottoman empires. Actually, it is about a police officer ‘Filinta Mustafa’ who was serving Istanbul in the 19th century with his partners. In an investigation against a powerful gun smuggling mafia, he is unreasonably accused of a crime. He continues his investigations and tries to clear his name as well.

Handsome Turkish actor Onur Tuna is playing the lead role of Filinta Mustafa in this historical drama. Hopefully, you would love to watch this series due to its uniqueness.

Muhteşem Yüzyil: Kösem is the sequel to Turkish historical series ‘Muhteşem Yüzyil’. Magnificent Century discusses the biography, victories and personal relations of Sultan Süleyman but Muhteşem Yüzyil: Kösem is about a powerful woman of the Turkish world. Yes, this series is about a Greek female slave ‘Anastasia’ who becomes a favourite of Ahmed I and gives birth to many of his children. Ahmed I allots her a new name ‘Kösem’. No doubt, it is Kösem Sultan who ruled the Ottoman Empire for years via her sons and grandsons.

In the first season, you can see Beren Saat as Kösem. Nurgül Yeşilçay starred as Kösem in the second season of this historical Turkish series. If we talk about reviews of viewers, it is a common opinion that the first season of Muhteşem Yüzyil: Kösem is full of excitement and adventure as compared to the second part. Withal, you can’t believe the ratings without watching it. So, watch Magnificent Century: Kösem first and then share your views with us by commenting below.

If you don’t want to watch serious and long historical Turkish TV series, then Kalbimin Sultani should be your first choice. This Turkish series is not only available in Turkish but also available in the Russian language with the title of ‘Султан моего сердца’. Even in this Turkish mini-series, the role of Kalbimin Sultani’s Anna is also played by a Russian actress ‘Aleksandra Nikiforova’. You will love to watch this small one-season historical Turkish series.

This is one of the pioneers and best historical Turkish series which is produced by Netflix Studios with the partnership of STX Entertainment and Karga Seven Pictures. You can watch all of its episodes on Netflix in both English and Turkish languages. The storyline of this Turkish documentary series is about the great Ottoman Emperor Mehmed II. This series also covers how Mehmed II became a conqueror and vanquished the city of Constantinople. Yes, Constantinople is an old name of Istanbul.

According to viewers, it is a very educational Turkish series that tells how Mehmed II helped the Ottoman empire to make social and political reforms. However, as Netflix tagged it under its 18+ category, that’s why DigitalCruch will also recommend only its adult and 18+ plus viewers to watch this series.

This is a soulful Turkish series that covers the journey of Yunus Emre. Yunus leaves his homeland and travels to Anatolia after the invasion of the Mongols. He decides to live a simple life and prefers to follow the way of Darvish. In short, it could be an appealing historical drama if you want to watch a journey of a Darvish.

In short, in this article, DigitalCruch shared one of the best historical Turkish TV series with its viewers with all the necessary details. However, if you have watched any exciting Turkish series from history other than our list, then you can share them with us. You are also welcome to share your views about Turkish historical dramas by commenting below! 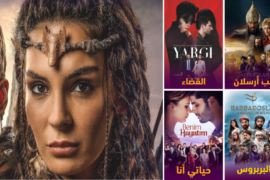