Maraşlı is one of the most anticipated Turkish TV series of Burak Deniz. After the finale of Bizim Hikaye, the fans of Burak Deniz were excited waiting for his forthcoming dizi. Although he also did a mini-series after ‘Our Story’ but Burak Deniz’s role in Marasli is very powerful. That’s why in this article, DigitalCruch is sharing about Maraşlı cast, plot and everything that you need to know.

The story of Marasli revolves around a veteran of Turkish special forces ‘Celal Kün’. The life of Celal or Jelal aka Marasli entirely changes when his daughter Zelish is shot down in a celebration event. After this tragedy, he tries to find the planners of this deadly event and joins his agency again. In this regard, Celal opens a bookstore and tries to find the connection of the city’s renowned ‘Türel’ family with this incident. To reveal this mystery, Maraşlı safeguards the beautiful daughter of Aziz Türel named ‘Mahur Türel’. Withal, soon he acknowledges that he loves Mahur.

Similarly, if we describe Marasli’s plot from the teasers, then the story begins from where Mahur Turel, who is a photographer, enters into the bookshop of Celal. When she comes out of the shop, she follows Celal’s dog and becomes a witness of a murder. The gang of murderers feel her presence and tries to kill her, but luckily Marasli saves her life. In Marasli Dizi, Burak Deniz gave life to the character of Celal Kun, and you can see gorgeous Alina Boz as Mahur.

In short, each episode of Marasli is full of action, thrill, and surprises because screenwriter ‘Ethem Özışık’ scripted it outstandingly.

Although it is easy to guess that Alina Boz is acting as Mahur Turel and handsome Burak Deniz is playing the role of former soldier Marasli in this TV series. However, Marasli is popular because of its entire cast. That’s why DigitalCruch is sharing all the details about the Marasli cast here.

Handsome Turkish model and actor Burak Deniz is prevalent among Turkish drama viewers because of its acting style and looks. Fans have already watched Burak Deniz in ‘Aşk Laftan Anlamaz’ as Murat and in ‘Bizim Hikaye’ as Barış Aktan. Withal, people were waiting for Burak Deniz’s latest Turkish series, and luckily, Marasli didn’t disappoint them.

Indeed, Burak Deniz is giving life to the role of a former military man ‘Celal Kun’ who is also known as Marasli in this drama. From the first teaser to episodes, Burak pleased the viewers with a powerpack performance.

Hence, former military officer Celal has faced many difficulties during duty. After retirement, he was living a peaceful life with his preteen daughter ‘Zelish’. But a sudden attack on Zelish drastically transformed everything. Now, he is safeguarding the Turel family’s beautiful daughter ‘Mahur’ to connect the dots. In the beginning, it is just a part of his operation, but soon, he falls into the love of Mahur.

Turkish-Russian actress Alina Boz who has also received the award of 2020 Shining Star, is playing the lead role of ‘Mahur Turel’ in Marasli. Like Elimi Bırakma and Aşk 101, fans are also appreciating her performance in television series Maraşlı.

If we talk about her character, Mahur Turel is a young and beautiful daughter of rich businessman Aziz Türel. She loves to work as a photographer and runs a small studio. However, the life of Mahur entirely changes when she witnesses a murder. The head of that gang ‘Savash’ threatens her life. Savaş tries to kill Mahur, but Marasli protects her. As a result, Aziz hires Celal as a personal bodyguard for Mahur. Withal, different secrets of the Turel family come into the knowledge of Mahur after that event.

Cute child actress Bedriye Roza Çelik is starring as Zelish in Marasli. Celâl Kün was living a happy life with her preteen daughter Zelish, but a terrorist attack changed everything. Although Zelish survived in this attack but unluckily, she didn’t speak after it. Surely, Bedriye is incredibly performing the role of Zelish.

In the Turkish television industry, Saygın Soysal is known because of his powerful acting and unique style. In Maraşlı, you can see Saygın Soysal in the character of Savaş Yıldırım. Savaş is basically the master of a criminal gang. But he is threatening the ‘Türel family’ to take revenge. If we look at the past, the father of Savaş named Omer and Aziz were partners. But Aziz arrested Omer in a fraud case because his wife was in love with Omer.

After many years of Omer’s death, his son Savaş enters into the life of the Turel family and tries to take revenge on his late father. Withal, it is not enough. Several mysteries are exposed in every episode of Marasli about the connection of Savaş with the Aziz family.

Sinem Akyol is another actress that you would see among the Marasli cast. She has also worked as an assistant director. In Marasli, fans would see Sinem Akyol as Hilal, a senior officer of the Turkish intelligence agency. She is collaborating with Celal to know the connection of the Turel family with terrorists. By the way, she is also the ex-wife of Celal and mother of Zelish. Another purpose of this joint venture with Celal is to find the handlers and planners of Zelish’s birthday party’s terrorism incident.

Graceful Turkish actor Kerem Atabeyoğlu started his career with ‘The Young Indiana Jones Chronicles’ in 1992. Till now he is giving excellent performances. In Marasli, he is starring as Aziz Türel, a known businessman and father of Mahur. He was living a prosperous life with his young wife Firuzan, two sons Ilhan & Necati and beloved daughter Mahur. Nevertheless, everything dramatically transforms when things come from his past.

Rojda Demirer is a brilliant Turkish actress who is popular because of her theatre performances. She has work in numerous television series, including Çarpisma and Adi Efsane. Rojda is starring as Firuzan in Marasli. She is acting as the second wife of Aziz Turel. No doubt, Firuzan Türel married Aziz because of his wealth, but she is loyal to her husband. But, yes, her relations with step-daughter Mahur weren’t good ever.

Neslihan Acar is not a proper part of Marasli, but you can see her tiny scenes in different episodes. In Marasli, Neslihan Acar acted as Sedef Türel, the late wife of Aziz Türel. She died because of cancer many years ago, but before her death, she recorded many videos for her daughter Mahur. For Mahur, these are just normal videos that a mother recorded for her daughter, but these videos have many secrets.

Serhat Kılıç has hired in different Turkish movies and series, but in Marasli, he appears with a unique role. Yes, Serhat Kılıç is part of the Marasli cast and plays the role of Necati Türel. Necati is the elder son of Aziz, who is an alcoholic. Surely, his family doesn’t take him too seriously, but he hides many secrets and plays big games.

Cemil Büyükdöğerli portrays the character of İlhan Türel, the younger son of Aziz. As you know, Necati doesn’t take much interest in serious things. That’s why İlhan takes care of his father’s business. He lives with a good-looking wife, Dilşad, and a son in his father’s house.

Melis İşiten is another great inclusion in the Marasli cast. Probably, many of you already know this young lady as an ex-wife of Turkish actor Uraz Kaygilaroglu. However, in Marasli, Melis is performing the character of Dilşad Türel as the wife of İlhan Türel. Meanwhile,

Dilşad is living a prosperous life in Turel house. But unluckily, she betrays her husband and has a relationship with her husband’s business partner Ozan.

You have already seen Cihan Yenici in Kaçak Gelinler. If we talk about his role in Marasli, then Cihan is portrayed as Ozan. This man is basically a business partner of Ilhan and seems like a good friend of Mahur, but he is not trustworthy enough in actuality. He is deceiving the family.

Nevzat is a junior commando who assists Celal in his operation to find the connection of the Turel family with terrorist activities. You would like his combat skills and present state of mind in Marasli.

Yahya Çelebi is starring as Suat who is the right hand of Savash. He aids Savash in every action. Definitely, he is completely loyal to his master. But whether Savash is his master, or is it his elder brother? The situation is complicated here, and you would need to watch Marasli to find its answer.

Everyone is familiar with Turkish actor Cengiz Sezgin. He is performing the role of the Turel family’s servant in Marasli. Definitely, Sadik knows all secrets of Aziz Turel.

Gorgeous actress Türkü Su Demirel is also a member of Marasli’s cast. She is a maid at Turel house and the daughter of Sadik. This series also gives vibes that she loves the elder son of Aziz Turel.

Gizem Kala has given strong performances in ‘The Protector’ and ‘Can Kiriklari’. Among the Maraşlı cast, she portrays the character of Ecem. Yes, she is a friend of Mahur and always tries to please her.

Where to Watch Marasli With English Subtitles

On the contrary, if you are looking for a website to watch Marasli with English subtitles, ExpressDizi is another free place. Although it adds some commercials and pop-up ads but the picture quality is the best at ExpressDizi. Surely, you can watch all bolum of Marasli Dizi on this website.

In brief, this Marasli Turkish drama review shares every single detail. Mainly, if you want to watch a romantic Turkish series full of thrill and action, you must watch Marasli. However, if you are already watching this Turkish drama, you can share your thoughts by commenting below! 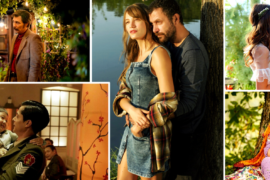