The popularity of modern Chinese dramas has elevated in the past few years. According to a Statista report, the C-dramas and film industry market crossed 235 billion Yuan or 34.85 billion USD in 2021. This report also forecasts that growth will hit 360 billion Yuan by 2024. Indeed, the latest Chinese dramas are hyped among viewers across the world.

For that reason, we are putting forward the best modern Chinese dramas to watch with English subtitles or even in Chinese if you know the language. Let’s begin:

Nothing But Thirty is the latest modern Chinese drama that covers the life of three ladies. This Chinese series shows how much pressure urban women face when they reach in their 30s. Its story is about three ladies Gu Jia, Wang Man Li and Zhong Xiao Qin.

Although Gu Lia is the wife of the Fireworks company’s owner but her husband achieved this success only because of her. But later on, he cheated on her. Similarly, Wang Man Li is single at 29 and is looking for a promotion as a sales representative before reaching her thirties. Withal, things don’t happen according to her plans. By the same token, Xiao Qin is married but not happy.

You will explore how these women change their fate. Especially this C-Drama is a great inspiration for ladies who are entering their thirties.

If you seek romantic action in historical charisma, “The long Ballad” sets a perfect standard for your expectations. This drama is history-oriented, featuring disturbing elements belonging to the Tang dynasty. Originally, you are looking at 626 C.E. amidst a disturbing political realm.

The story delineates a tragic incident massacring Li Chang Ge’s family. From that time, Li Chang Ge is stern about the decision to take her family’s revenge. In pursuit of doing so, she comes across a charming tribal prince. She suffers from defeat while later catching feelings for him.

It is definitely considered one of the best modern Chinese dramas with a happy ending, but you will also love the character of Ashile Sun. Yes, Chinese actor Leo Wu got a huge international appreciation for this role. So, you must watch this new romantic C-drama.

Love in Flames of War – 良辰好景知几何

This is one of the best modern Chinese Dramas in 2022 that features romance and hardships of war. This romantic Chinese drama series revolves around Xiao Bei and Lin Hang Jing and builds up their circumstances in times of war. Xiao Bei’s family has taken in Lin Hang Jin, but she faces Xiao’s constant harassment.

Also, Lin Hang Jing is a headstrong character, so she valiantly resists the bully. Xiao Bei eventually falls for her, but they are parted for some years due to his military college obligation. The situation is no longer the same as Xiao Bei’s return.

Closely sensed dark romance in this promising Chinese drama launched in 2020. This drama features Zhang Xin Cheng as Li Zhen Yan who is a remarkable musician. He has a certain career in the music industry, courtesy of his talent’s acknowledgements across the world.

In addition, the story blesses the audience with Xiao Wo’s presence who is a talented pianist. They both share the same passion for music, but Zhen Yan is trapped by the demons of his past. See if Xiao Wo’s intimacy will lead Zhen Yan back to the life he always imagined.

The Untamed is a top-rated modern Chinese series that exhibits strong fantasy and romance at its core centre. Viewers are likely to see continuous sequences of action fuelled by havoc. The story discusses Lan Wang Ji and Wei Wu Xian upon discovering a substantial secret kept for years.

So the plot mainly focuses on extinguishing evil threats to the world. For that, a mysterious child leads back to life from death in order to save the world from certain destruction. Luckily, you can also easily access this modern Chinese drama on Netflix.

The Romance of Tiger and Rose – 传闻中的陈芊芊

It is one of the most popular and best C-drama romances incorporating history and comedy. The story is based on Chen Xiao, who traps herself in her TV series script. That being said, she found herself jeopardised of becoming the third hated princess of the screenplay.

Her character is to be killed by the male lead that she wrote. Now, she has to find her way back to safety by bringing two leads together in harmony. So, the show has a thrill that intermingles with light romance to meet the audience’s pleasure. In simple words, it is the most beloved romantic Chinese drama by Zhao Lu Si that fans love to watch on Prime Video with English subtitles.

Lost in 1949 is one of the most incredible C-dramas to watch in 2022. It takes on action, hype and mystery in a delicate fusion. Basically, the story features Huang Li Wen as a female accountant. The story unravels itself on New Year’s Day in 1949 when Huang Li Wen returns to Shanghai.

Being a communist agent, she is impersonating a commoner to gather valuable information for the communist party. On her mission, she even comes across her twin brother, who plays a vital part in the story. Therefore, this series is all about suspense and mystery that remains throughout the ending.

This fascinating Chinese show presents romance and comedy in a lightsome way. The show takes on a prime figure, Ling Ling Qi, who is a kind lady. She is always willing to help others despite her existing troubles. Unluckily, she becomes a victim of her insecurities.

This proves to have a deep impact on her performance at the workplace. In addition, she has trouble confessing her feelings to her colleague at work. Therefore, find out how she paves her way out of these insecurities and live confidently. You will watch Dilraba Dilmurat in the leading role in this modern Chinese drama.

This modern Chinese drama features a never-ending element of love and heartache. You will be captivated by contrasting and appealing storylines in service of love revival. The show starts when Wen Nuan finally returns to China after accomplishing success in the United Kingdom.

Additionally, there are mysterious elements clubbed in the story that keep elevating the viewer’s curiosity. The plot describes the story of two passionate hearts and how they parted is still a mystery. So the drama takes on heartbreaks and profound love that never dies even in all those years of separation.

Word of Honor is one of the most talked about modern Chinese dramas that have millions of views only on YouTube videos. Yes, the international community loved to watch this C-drama with English subtitles on different platforms. Word of Honor is a coherent action story that circles around Zhou Zi Shu. Basically, he is leading an assassin’s group in fealty to Prince Jin, undertaking dark missions. In this drama, Zhou Zi Shu played by Zhang Zhe Han sets upon a dark mission in disguise.

Moreover, the plot interestingly features the “Glazed Armors” conspiracy that has brought unrest everywhere. Later, Zhou Zi Shu fraternizes with Zhang Chengling from the Mirror Lake sect group and nefarious Wen Kexing of ghost valley. They all form a strong alliance to expose the dark sides of the time.

This modern Chinese Drama discloses the intriguing story of a computer science student and an online singer, Tong Nian. She is very social and has no issues meeting new people. Furthermore, the story features Han Shang as a cybersecurity expert.

This whole introductory setting changes when Tong Nian sees Han Shang in a café. It takes some time for the love story to nurture alongside comedy sequences. Moreover, this C-drama trails behind comic elements and a fascinating love story. It certainly is a delightful show to follow for most folks.

Put Your Head on My Shoulder – 致我们暖暖的小时光

This drama depicts a cute romantic C-drama featuring Xing Fei as Situ Mo (Protagonist). She is in trouble with her future as her graduation approaches. Situ Mo is shown as a feeble character, unable to make her life decisions.

She majors in accounting but happens to bump into a charming fellow from physics major as school districts merge together. Hereof, handsome Lin Yi is playing the role of Gu Wei Yi in this Chinese drama. In short, the story intermingles light romance with comic elements to boost liveliness. Find out if they both make a suitable life match for each other in this captivating story.

This incredible Chinese show takes you through a rollercoaster of love and social trials. The direction of this show is to address some social issues while glorifying love at the same time. This drama is basically an inspiring love story that stands between He Fan Xing and Yuan Song. Although this is a famous Chinese show on Netflix but it is a remake of a Thai series.

He Fan Xing is an established woman who fell in love with Yuan, a youngster. Both protagonists face rants regarding their age gap from society. However, the story glorifies love by ending these social evils that exist in a conventional society. So the love story thrives, despite the troubles.

Lost in the Kunlun Mountains – 迷航昆仑墟

Lost in the Kunlun Mountains is a new Chinese drama that unravels the intriguing mystery of thought-provoking Kunlun Ruins. The plot of this modern Chinese drama finds its pace with the puzzling disappearance of Ding Yun Qi’s father. This search aids in the sudden discovery of Kunlun Ruins.

Basically, this drama’s plot sets its footprint on five signature dates under Tain Guan’s leadership. Besides, Ding Yun Qi takes on the Kunlun mountains discovery after establishing his research to access the treasure. So he is regarded as the center of the drama’s spirit. However, Ding Yun Qi has to go through several trials to fathom the discrete reality of these mountains.

If you are a fan of lighthearted and binge-worthy Chinese shows, then Skate into love delivers exactly that. It came out in 2020 and became really popular among the youth. This uplifting drama gracefully delineates the struggles of youth athletes.

Basically, the story is focused on two childhood classmates, Li Yu Bing and Tang Xue. They realize their passion for ice skating and pursue this afterwards in the story.

Meteor Garden is one of the romantic Chinese dramas you can watch on Netflix, mainly if you love high school series. This appealing C-drama romance circles around Dong Shancai, an ordinary girl accepted into the most reputable university in the country. Drama’s story stresses an incident where she confronts F4, a group of the most popular boys on the campus.

Chinese drama series are getting much more prevalent among Asian drama viewers after Korean dramas. However, modern Chinese dramas are the most watched ones. Hopefully, our list of the best modern C-dramas will help you find a show according to your taste. 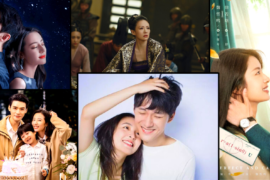